Recompile is a 3D Metroidvania game that comes to us from the development team Phigames, and it is an experience in which you will play the role of a program whose mission is to rehabilitate the central system of a facility. Was she able to keep her promises?

The game world represents the central system of the facility, which suffers from many problems and requires some improvements and fixes requested by the unknown person who brought you into the system. One of the surprising elements in the game is its story, which is told through a set of texts that you have the option to read, these texts You tell us about the events that took place in the facility before you arrived and the dialogues that took place between its staff. These dialogues were written so that they generate curiosity to search for the next dialogue with the introduction of drama, funny situations and other surprising ones. Recompile may be one of the best games that applied this trend in telling the story Attractive to the reader.

On the graphic level, the game looks very beautiful with its graphics and design of its world consisting of many simple shapes such as squares and triangles, which form more complex designs. On the audio level, a group of beautiful melodies are presented that mix between piano melodies and electronic melodies that have some of the character of classic melodies.

The gameplay system is simple and is limited to movement buttons and a button to aim and shoot, with 3 buttons allocated for the special abilities that you will get as you move forward with the experience. Unfortunately, the game fails to apply many of its concepts and ideas properly here. Jumping between platforms is a bit confusing, especially at the beginning of the experience when You will be able to jump only once and you will find that you will fall repeatedly due to the design of some strange environments, which may make you feel that some platforms are attached to each other, but they are not. From the start it’s like double jumping and dashing in the air.

Some environments are designed so that you will continuously jump from one platform to another without presenting a distinct challenge or difference from a previous area. The goal since that is to extend the life of the experience from our perspective and here you will feel the monotony of these challenges and the lack of innovation in them, and the other confusing thing is the absence of instructions, the game puts you in an open environment It tells you the goal without directing or without specifying points of interest. I found myself fighting a boss who was impossible to defeat without a certain ability that could have been obtained in a previous area. There is also a certain path that we find that ending the game is impossible without knowing this path is due to the concept of trial and error so that You will realize that Zone A cannot be terminated at the present time which means going back and experiencing Zone B! 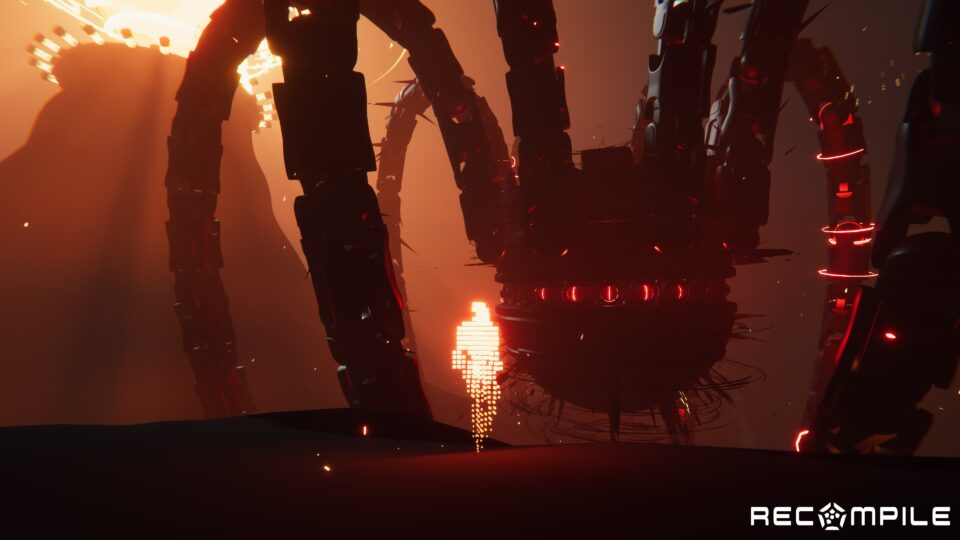 The battles are somewhat entertaining when we talk about fighting enemies, but the fighting of bosses is catastrophic. We are talking about random and chaotic confrontations against bosses who move at an annoying speed even after obtaining the necessary ability to defeat them, which kills the enthusiasm for these confrontations, and one of the abilities that was focused on in promoting the game It is the ability to hack systems, which we found to have very limited and unimportant uses except for the need to use it in one of the areas to move forward and you may forget that you easily have this ability because its use is not useful or entertaining.

The content in Recompile is limited and the experience is short. Except for the facility’s staff dialogues and some reports, there is nothing to collect or search for, besides moving towards the next goal. Finishing the experiment required 6 hours with a very low value for re-experimentation. In the end, we found that Recompile succeeded in the aspects that We did not expect her to shine in her, any storytelling, but she failed to apply the various elements of the gaming experience as required to come out with a somewhat enjoyable experience, but it is full of flaws and unfortunate decisions.

This game was reviewed with a PC review version provided by the publisher.