Announced Asus Days ago, about the new gaming phone, ROG Phone 5 Pro, with great specifications and prices, with a pioneering Snapdragon 888 processor and a giant battery with a capacity of 6000 mAh, and below today we review with you the full review of the phone’s specifications and prices so that you know it before it officially arrives in our local markets, follow us. Dimensions and materials of manufacture: 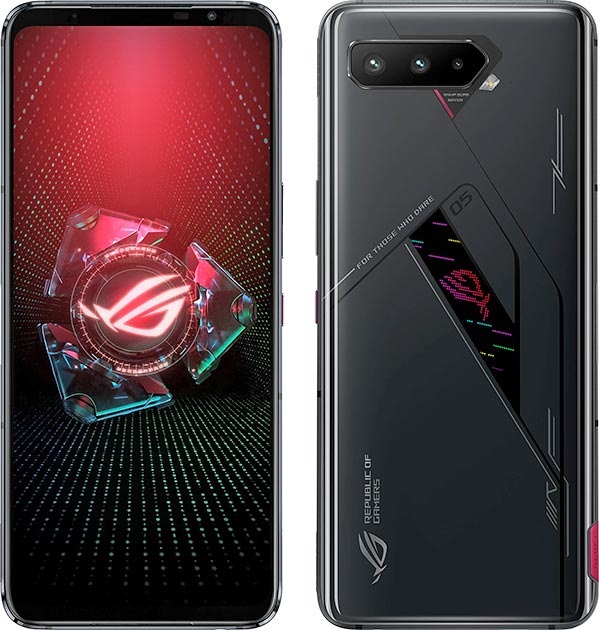 The company relied on a design that flips in the front at the front camera, with the use of a shiny glass body for the phone that gives the phone an elegant look similar to the leading phones, and despite its ability to withstand scratches, it may be easily broken over time with shocks and falls, so you may need a protective cover For the phone, and you can use one of the waterproof covers if you need to, the phone is not resistant to water or dust, and the phone comes with full aluminum edges, and the phone supports the built-in fingerprint sensor in its screen, in addition to its support for two USB ports for charging and a 3.5mm jack port for the headphones, and the phone supports From the back is a pressure-sensitive sensor in a number of areas, and also supports a screen with LED lights in the backend that distinguishes its design.

The screen came with AMOLED panels that result in high quality and appropriate resolution of the image, it is able to display content in a clean manner with a review of details, with natural colors and realistic comfort for the eye, and it comes in a large size suitable for modern phones, and it supports the new dimensions of display in the screens, Most of the front end area with thin side edges, and the screen supports an external protection layer to resist scratching, as for the most important features of the screen that make the phone suitable for gaming lovers, it supports touch acceleration up to 144 Hz to run the most powerful games, and supports modern display technology HDR10 +, along with its gentle support Colors up to 1 billion colors, and support for high brightness up to a maximum of 1200 nits.

The phone features the latest processor ever Snapdragon 888 of the leading category, where the processor comes with 5 nm technology, which helps it to provide speed in performance in exchange for also saving in battery power, and this chip comes with a powerful and fast graphics processor for games, along with random storage space The giant 16 GB, which facilitates multitasking on the phone and contributes to the speed of running applications in the background, and the huge internal storage space as well, which allows storing a lot of files without affecting the performance of the phone, but unfortunately the phone does not support an external memory port.

The phone comes with a rear camera that has three high-quality lenses with a great Sony sensor, but it is not the best among the leading category phone cameras, and this can be justified by the fact that the phone is a phone intended for gaming lovers, and there are other phones for photography lovers that can be acquired at these prices, as the phone depends on It is marketed for performance capabilities more than the quality of the camera, however it supports in the front camera 3 great imaging sensors that produce high-quality images, and it is characterized by high capabilities in video recording and recording speeds, and the front camera is much modest in quality.

The phone supports a giant battery with a capacity of 6000 mAh, it supports fast charging with very high quality, and also supports reverse charging, and it can work for more than a day with moderate and random use, and it is one of the most prominent advantages of the phone.