Games inspired by classic experiences have not been few in recent years, but these games rarely succeed in providing the same feeling and the same quality that players look for in classic experiences, in this review we will talk about Kaze and the Wild Masks, another platform game inspired from the classic nineties experiences. Was it able to provide the joy that those games offered, or was it another failed attempt?

The game puts us in the role of Rabbit Kaze, who is trying to save her friend Hogo and the Crystal Islands from the curse that befell her, and the experience will start directly without going into much detail in the details of the story while leaving the opportunity for you to get a better idea about it, a point we will return to talk about later, the game world brings us beautiful cartoon graphics and music It has a fun feel, reminiscent of classic Donkey Kong releases and similar titles that take you on a journey through the jungle.

The control system is limited to movement buttons, a button to jump, and another to attack, which can be used to make Kaze use her long ears to help her float in the air to travel longer distances before reaching the ground. The progress of the game is the ability to wear special masks based on different animals to enable you to take advantage of a special ability. The tiger mask, for example, gives you claws that help you to climb walls, while the shark mask provides the ability to swim and dash in the water. 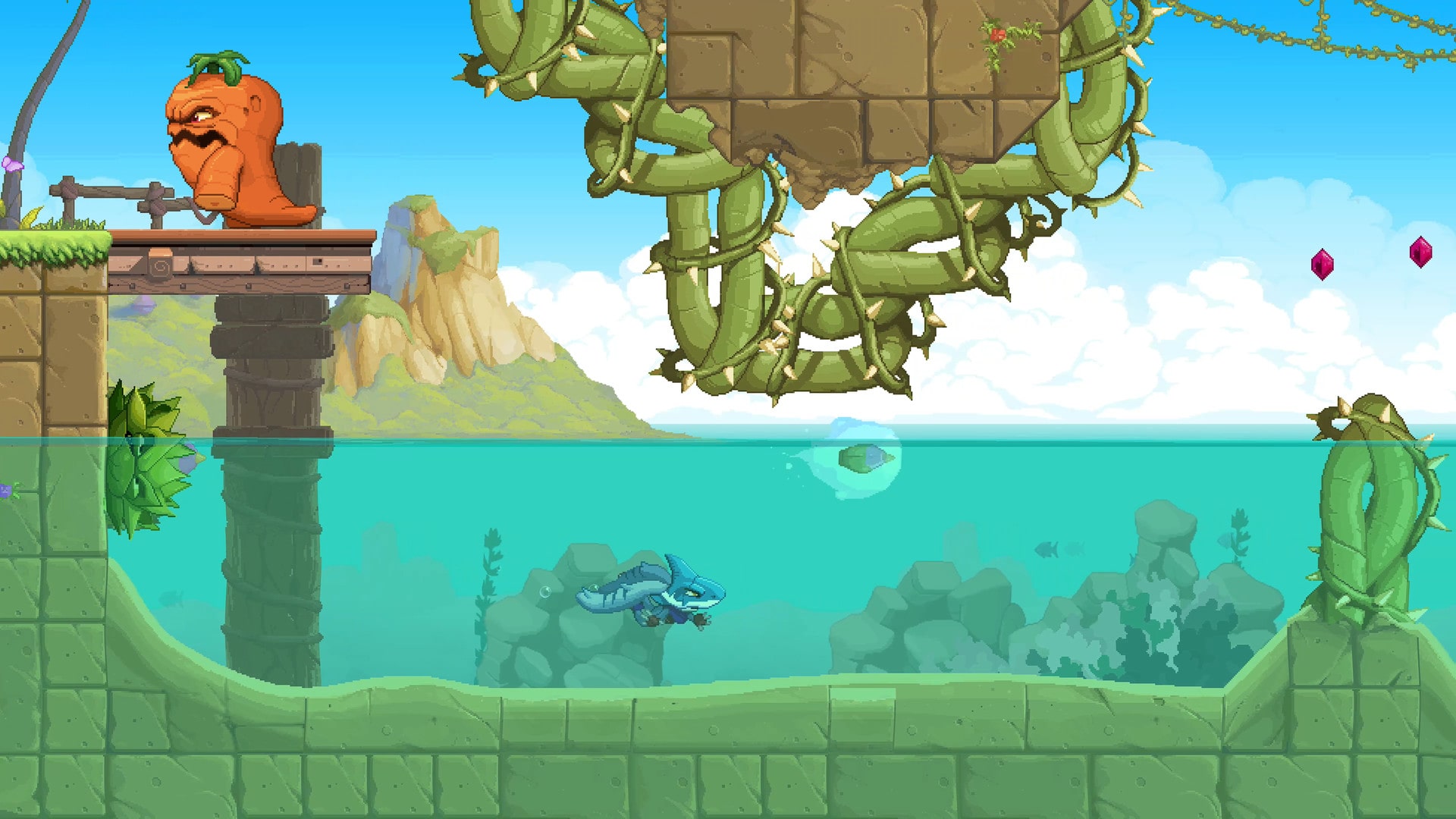 Instead of focusing on building the stages around the different masks, the game builds its stages around several different concepts, there are stages that are specially designed for a type of masks, which are radically different from each other, while others are designed in the usual style of genre games by starting at a certain point and trying to reach the end of the stage and we have Finally, the stages are designed around a specific challenge, such as being chased by a hurricane or running entire stages on a moving platform as you pass through many traps, obstacles, and the diversity offered by the game is impressive. For traps, platforms, or even secrets, sometimes you feel that some elements are randomly placed in the environment, but upon checking them, you will find evidence of a hidden secret or an easier way to overcome an obstacle.

Difficulty begins at a medium level and then escalates gradually, and although it may not reflect that, Kaze and the Wild Masks is a challenging game that requires a lot of accuracy, especially in the second half of it, and if you are looking for this kind of experience, you will find your way here. After a period of play, you will realize that the game, despite its presentation of some of its own ideas, most of its ideas are borrowed from the famous games of the genre, ideas that have already been applied by many of the previous games, but when thinking about a modern game that applied these ideas with the same perfection, you will find that the answer is difficult. The game presented it is comparable to some classic games and is rarely found in modern games, as it is in the end a very loyal game to classic experiences and its fans, and this is what you should expect from it because Kaze and the Wild Masks will not surprise you with its revolutionary ideas, but with its distinctive application of traditional ideas.

The game offers excellent content judging by its type, in each stage there are three types of gems that can be collected, the yellow jewel you get by collecting the letters that make up the name Kaze and the pink jewel you get by collecting 100 small gems in the stage while the green jewel is obtained through Finishing two secret challenges hidden in each stage, gems are not just an empty means to increase the life of the experience, but rather play a special purpose other than the yellow gem, obtaining a green gem reveals to you a drawing that gives you a better idea of ​​the background of events and characters that you benefit from masks as they reveal to you About a special challenge when collecting a certain number of them, while the pink gems will reveal to you a special surprise when the game ends (we will leave you the task of knowing what this surprise is) and obtaining those gems is not that difficult so that the player is not burdened with the task of collecting them. Speaking about the difficulty of the game, it presents a challenge directed to professionals, as we mentioned, and each stage contains a memorization point only in the middle of it, and receiving two hits or a fall means loss and replay from the beginning of the stage or from the point of preservation in the event that you reach it, there is a difficulty option directed to those looking for an easier experience while he is doing By providing more save points, and losing is done after receiving damage 3 times.

The experience suffers from minor flaws, including annoying cutting similar to Screen Tearing, but with a less obvious effect, and some may not notice it, but it was annoying for us, and there is also the confrontation of the last leaders, in which we found that the difficulty was not balanced, and some of its parts were a bit boring and the easiest difficulty option. What we mentioned needs some improvement, as the experience is still very difficult for those who are new to this type of experience or young people, so the game is directed to those over the age of seven at the end of the matter, and we see that this phase, despite the facilities it provides, does not make it playable by players. Youngsters.

We ended the experience after 10 hours of gameplay, at a rate of 73%, and to accomplish everything in the experience from collecting gems and overcoming challenges, you may need an additional 3 to 5 hours, Kaze and the Wilds is one of the few games that were truly faithful to the classic experiences and offered to those who love them. Experiences are what they crave for challenge and variety and may be one of the few games that came close to the actual level of those experiences.